By an act of Congress, in 1887, certain lands were set aside in various states and territories for the establishment and maintenance of homes for Union veteran soldiers. In the state Veterans Home was established in 1891 and has been in operation since 1893.

At the meeting of the First Legislative Assembly of the State of , House Bill #305 and Senate Bill #60, entitled, "An Act Appropriating Money for the Erection of a Soldiers' Home at , and for the Contingent Expenses Thereto", was passed and signed by Governor Andrew J. Burke on . At this time, money was appropriated for the purchase of land and the erection of the necessary buildings.

On , a Board of Commissioners, consisting of General William A. Bentley, Major General L. Foster, Colonel L. H. Hankinson, Captain N. Linton, and Captain Harris Gardener, purchased 90 acres of land for $3,500 in the valley of the , adjacent to the city of , and known as the "Cramer Farm". Colonel W.W. Mclvaine was elected as the first Commandant and began his term . C.R. Palmer of served as the first treasurer. The Board of Admissions was made up of the Chairman of the Board of Commissioners, Commandant, and Surgeon. The general supervision and government of the Home is vested in the Administrative Committee on Veterans' Affairs as outlined in Chapter 37-18.1 of the North Dakota Century Code. 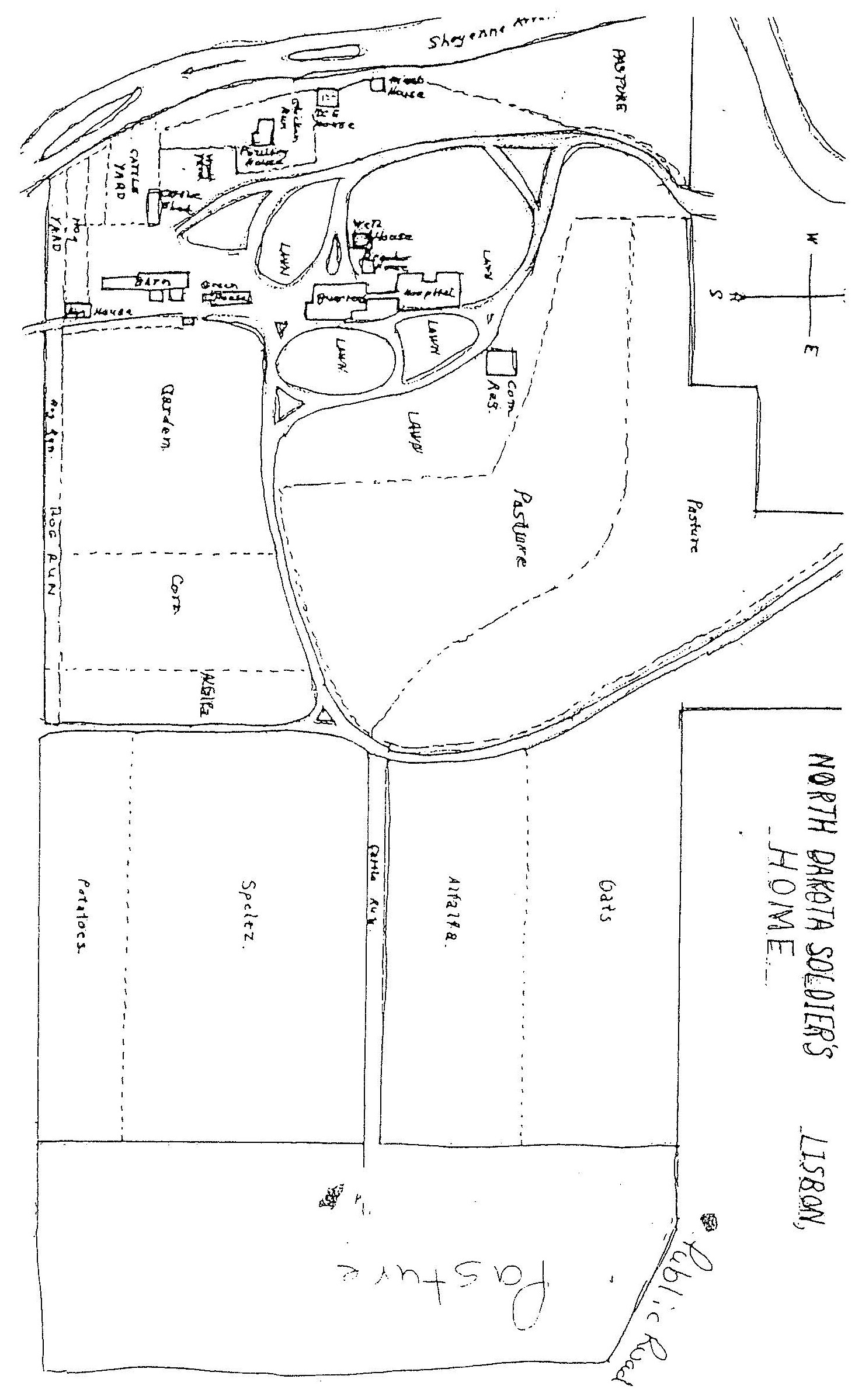 The lands first allotted for the support and maintenance of the Home, amounted to approximately 40,000 acres, were located in various parts of the State. They are under the supervision of the State Land Department. The ND Veterans Home Trust now has 2,753 acres left from the original 40,000 acres.  The prior land sale proceeds and mineral royalties are the corpus of the Veterans Home Trust Fund. When times were prosperous the interest and income from the land was more than sufficient for the maintenance of the Home and a surplus was accumulated. The home was maintained without any appropriation of states funds during this time and the surplus carried the Home through until approximately the 1930s.

The Board of Commissioners selected the architectural firm of Orff Bros. of Minneapolis, Minnesota, to draw plans and specifications for a barracks building. The contract was let to C.A. Leck of Minneapolis. The original barracks building was built of Menominee brick at a cost of $18,000. It was finished in native wood with maple floors; the barracks had an attic, two floors, and a basement. The attic held a water tank which had the capacity to hold 30 barrels of water. The second floor had two dormitories, which held 15 people each, a six-patient hospital, and a lavatory with four marble wash basins. The first floor had a parlor, reading and dining room, office, kitchen, pantry, and serving room. The basement contained a boiler room, fuel and vegetable rooms, bathroom, and laundry. The barracks building was not completed until 93, and the first veteran entered the Home on 93. He was George Hutchings, a veteran of the Civil War and a resident of . He was 73 years of age at the time.

When the Home first opened dispensary type of medical care was available, with a local physician making sick call each morning. Two practical nurses were employed; one was on night duty and the other serviced at intervals during the day. In the year 1899, a hospital building was erected, at an approximate cost of $16,000. In the late 1940s the hospital was closed and the building became the civilian employee quarters.

In 1907, a building was constructed to serve as the Commandant's residence, at an approximate cost of $9,000.

At various times the out buildings were erected for horse and cattle barns, hog house, chicken coops, and green house.

Since the Home was self-supported in the early days, much of the labor was performed by the residents working with the farming operations, laundry, kitchen, garden, and keeping quarters clean. As the age group became older, this labor was not available due to physical disabilities, and civilian employees were hired. A work therapy program was designed to keep residents working if they chose or if there were jobs available. In the 1990's, residents started to receive minimum wage. They may choose to volunteer their time as well. 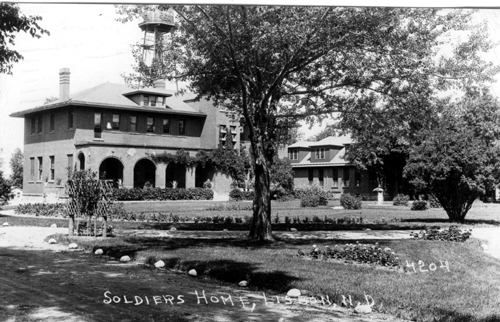 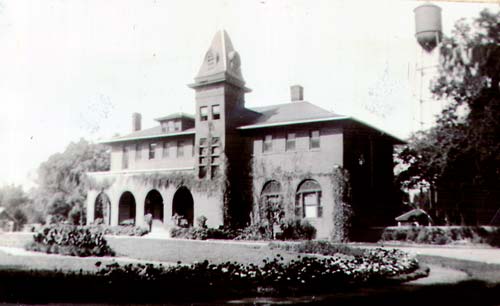 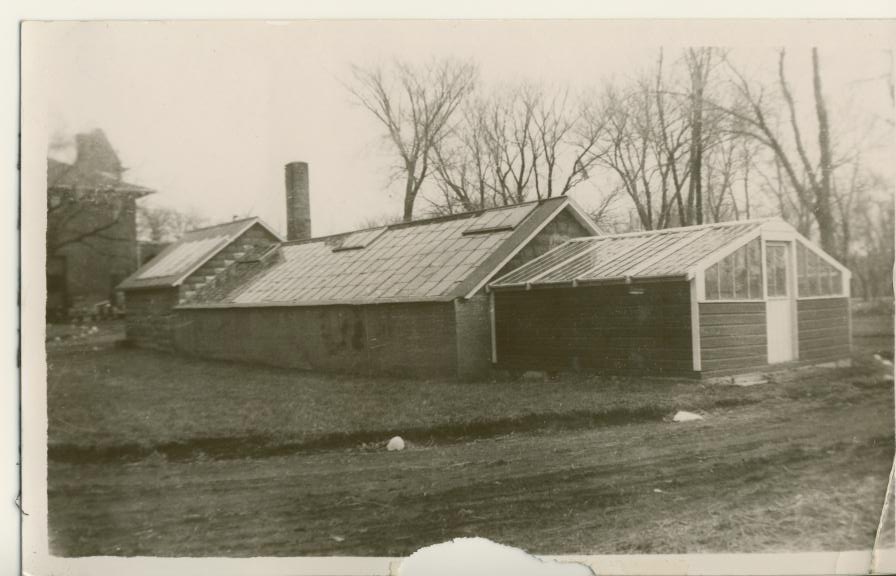 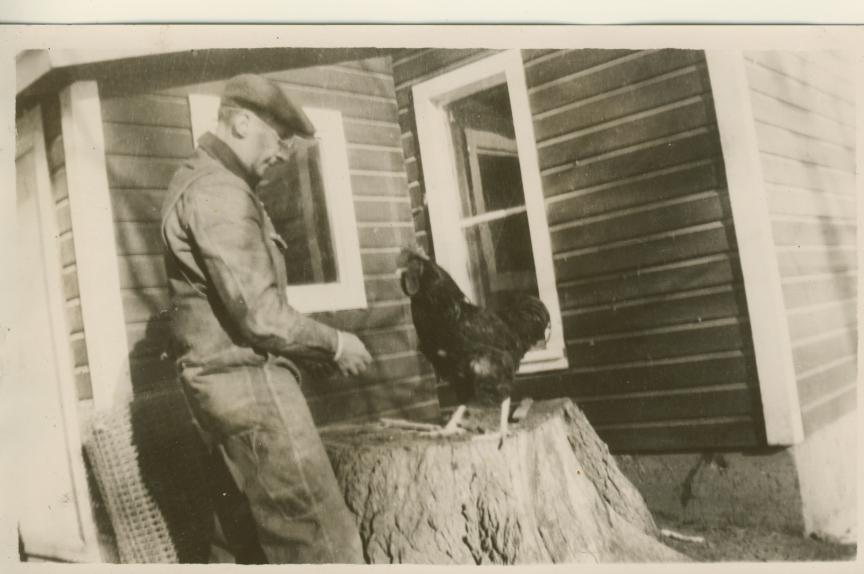 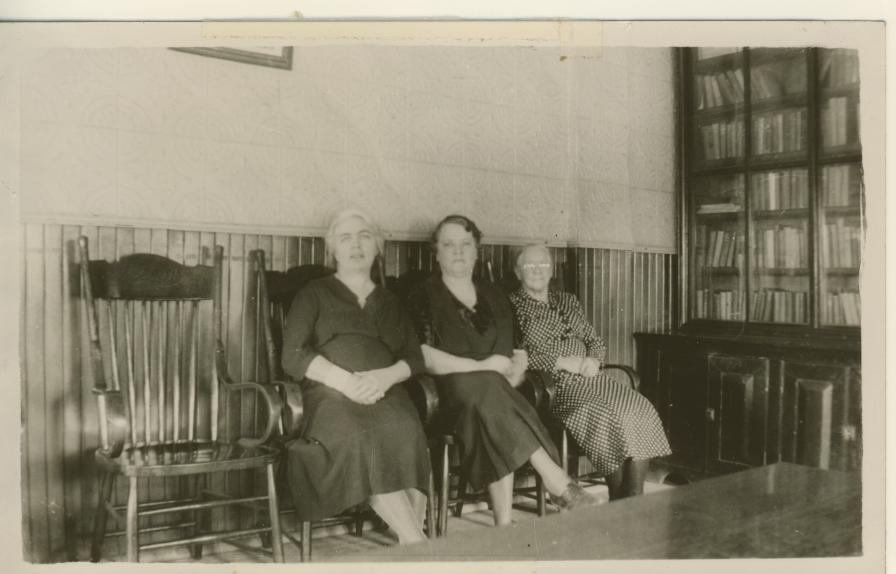 The Board of Commissioners adopted the title of "Board of Trustees" in June 1897. The original “Board of Trustees” was comprised of two from the Spanish-American War, two in the First World War, and one in World War II. In 1971, the title was changed to the Administrative Committee on Veterans Affairs, who continue to govern the Home. They are appointed by the Governor, with the advice and consent of the Senate. Each member must be citizen of the and a resident of the State of North Dakota. This committee consists of three members from each major veteran’s service organizations.

The Commandant for the Veterans Home is appointed by the Administrative Committee on Veterans Affairs. Listed below, in order of service, are the Commandants and their terms of office:

Through the years, the barracks building deteriorated and was in such a state of disrepair that it would have taken thousands of dollars to repair, and further, the membership was increasing to a point where additional room was necessary, so a bill was introduced at the Thirtieth Session of the Legislative Assembly providing for erection of a new barracks building, and was approved on 47. This building was constructed at an approximate cost of $600,000 and was completed and formally dedicated on ; by Governor Fred G. Aandahl. The building was designed to accommodate 150 veterans, spouses, and widows. It was modern in every detail and an automatic elevator places the entire four-story building on one floor.

The old barracks building was demolished during the summer of 1952; the entrance of this building is marked by a Civil War cannon. The hospital building, which is no longer standing, was converted into a residence for the civilian employees, and housed a $20,000 laundry in the basement. 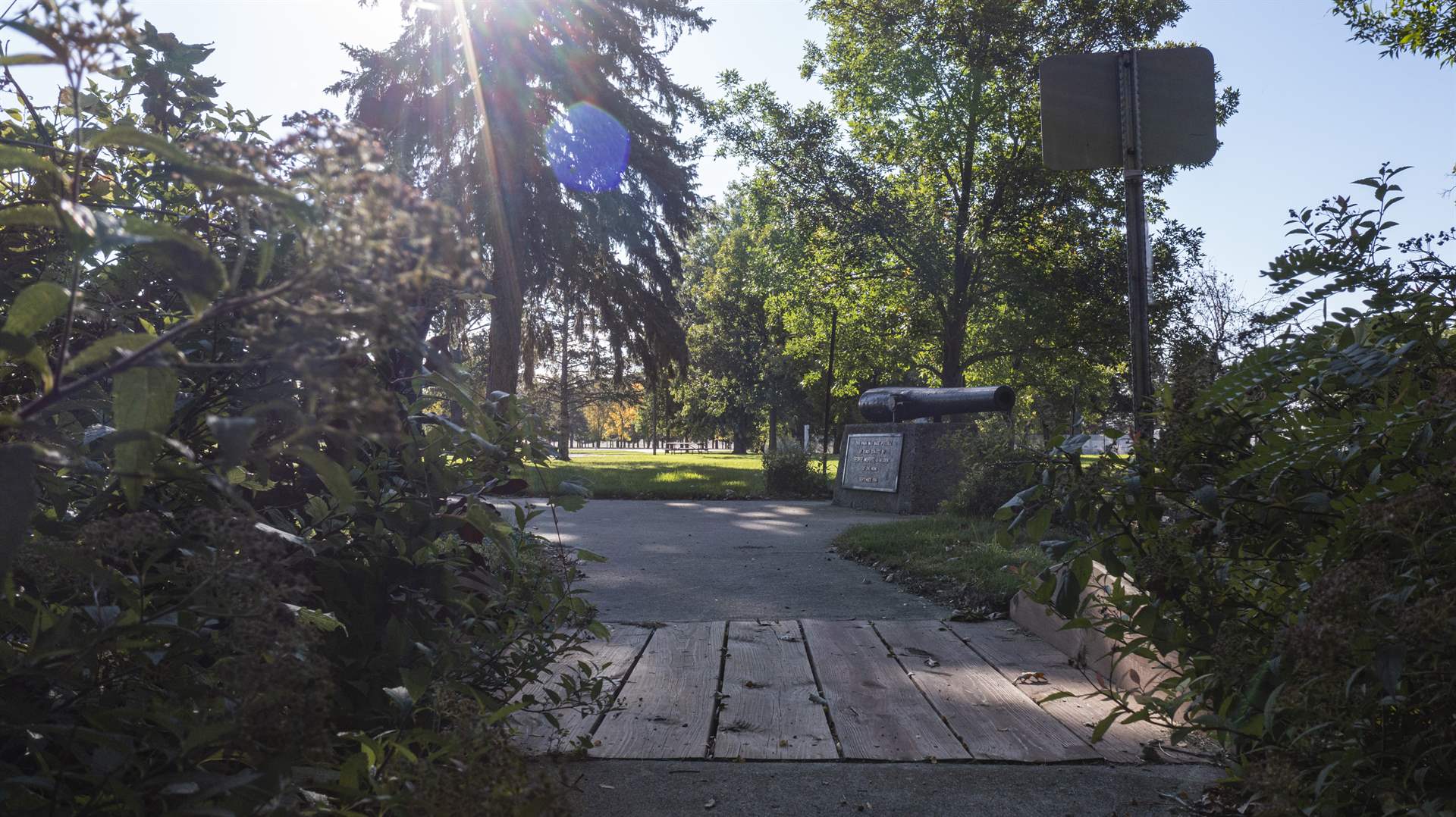 One of the walking paths on the campus of the North Dakota Veterans Home.

A 1.7 million dollar construction and remodeling project was completed in 1980.With its completion, the facility conformed to all state and federal regulations on life safety and handicapped accessibility, increased its capacity to 159, provided new laundry facilities, and expanded its crafts area considerably.

A new heating plant was built in 1981, which added an electric boiler to allow the Veterans Home to take advantage of off-peak electric rates. The plant also houses the oil-fired boilers that are used as standby heating, a two-stall garage, and a 100 KW generator to provide power in case of electrical outages.

the Administrative Committee on Veterans Affairs changed the name of the Soldiers Home to 'North Dakota Veterans Home'. It was felt that the new name adequately reflected the clientele the Veterans' Home served.

The 150-bed domiciliary changed capacity to 112 for veterans and spouses as well as the domiciliary care changing to Basic Care.

A four-season room "Gazebo" was added to the 38-bed nursing home (skilled unit) in 2000.It has provided the needed room for activities and a place for families to gather with their loved ones. The funds for the "Gazebo" were provided by donations and the Post War Trust Fund.

The Veterans' Home is maintained and operated by three sources of revenue; the General fund of the State of North Dakota, federal funds, and special funds. The Veterans' Home maintains a burial plot in the local cemetery, which is known as the . Not all residents who pass away are buried at ; some are taken to where they preferred to be buried. 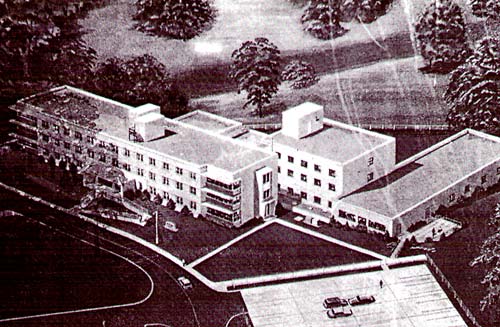 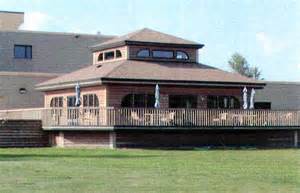 On February 27, 2009, the North Dakota Legislature passed Senate Bill # 2025, which made it possible to build a new facility for the Veterans of North Dakota.  In May 2011, we moved into our new state of the art Veterans Home. The new home focuses on individual households designed for 12-13 residents. Each household centers around a large living room area, open kitchen and dining area. Each household looks and feels like a home, with few medical signposts. The new home has two basic care pods that can house 98 residents and one skilled care pod that can house 52 residents. Each pod has four households connected together by a hallway that leads to the center core of the building. The center core is designed with a main street theme where residents can visit the bank, library, barber shop, pool hall, museum, town hall, movie theater and chapel.  The new Veterans Home utilizes green technology through the use of a geothermal system with 738 wells that heat and cool the entire building. 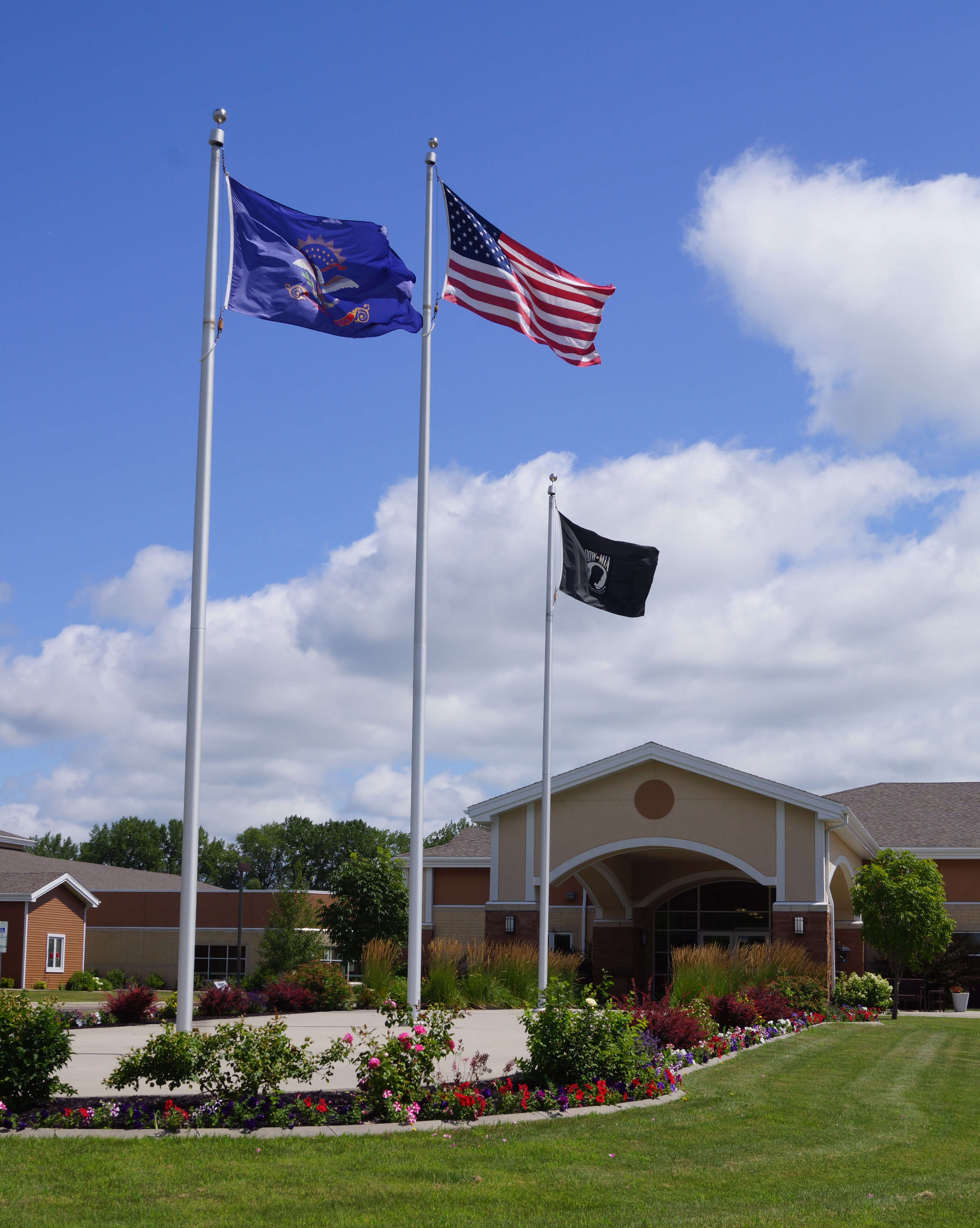 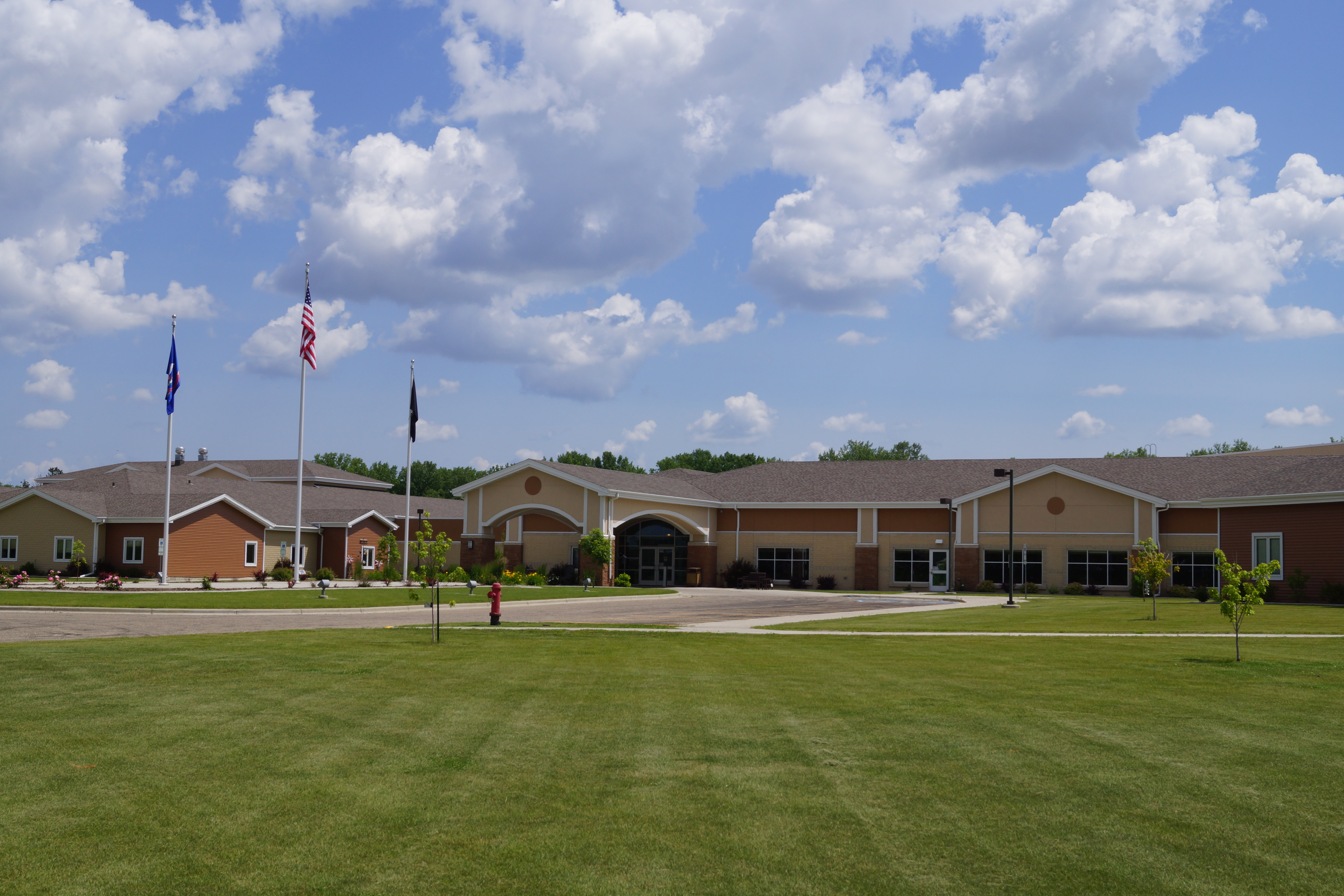 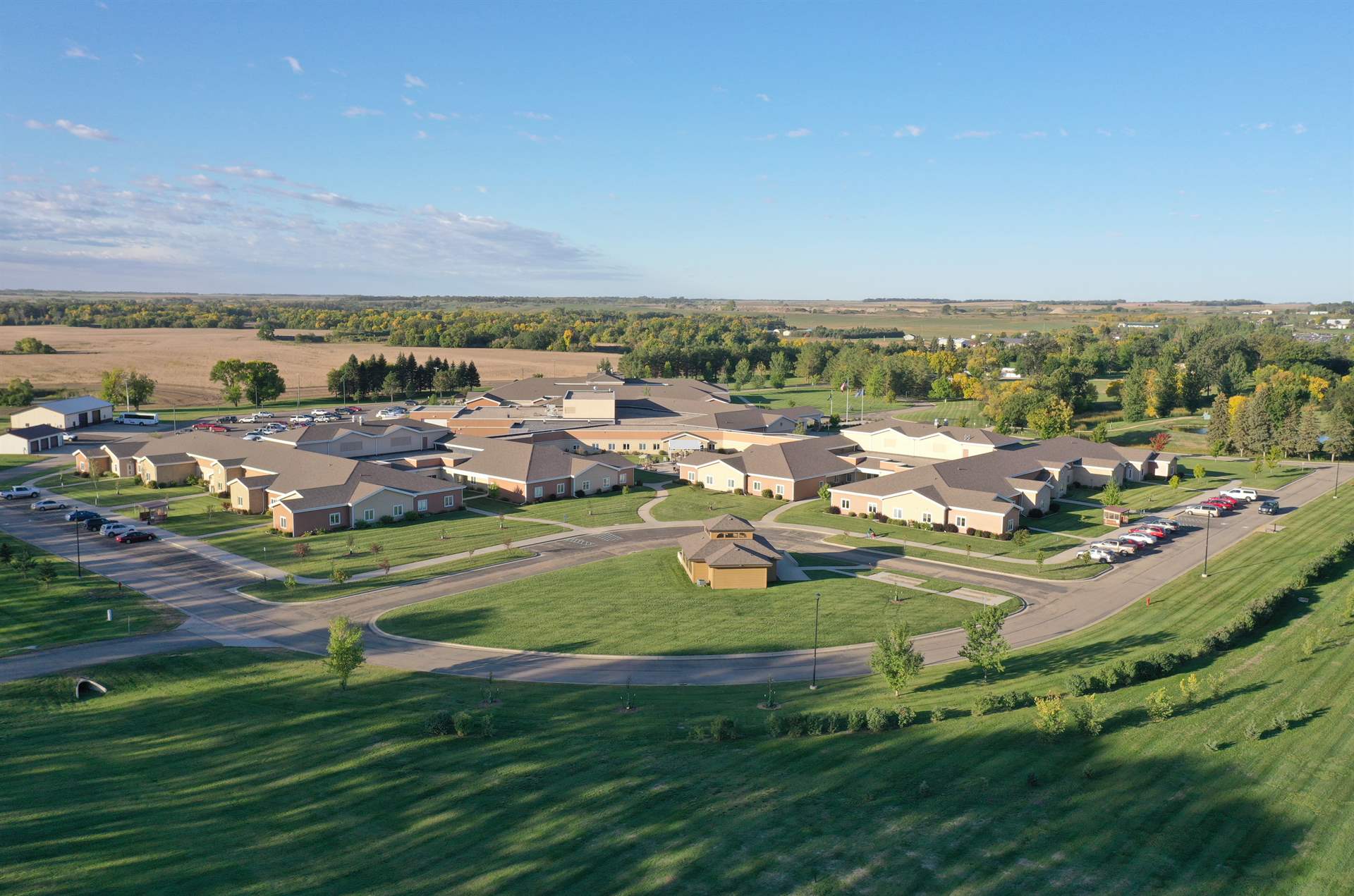 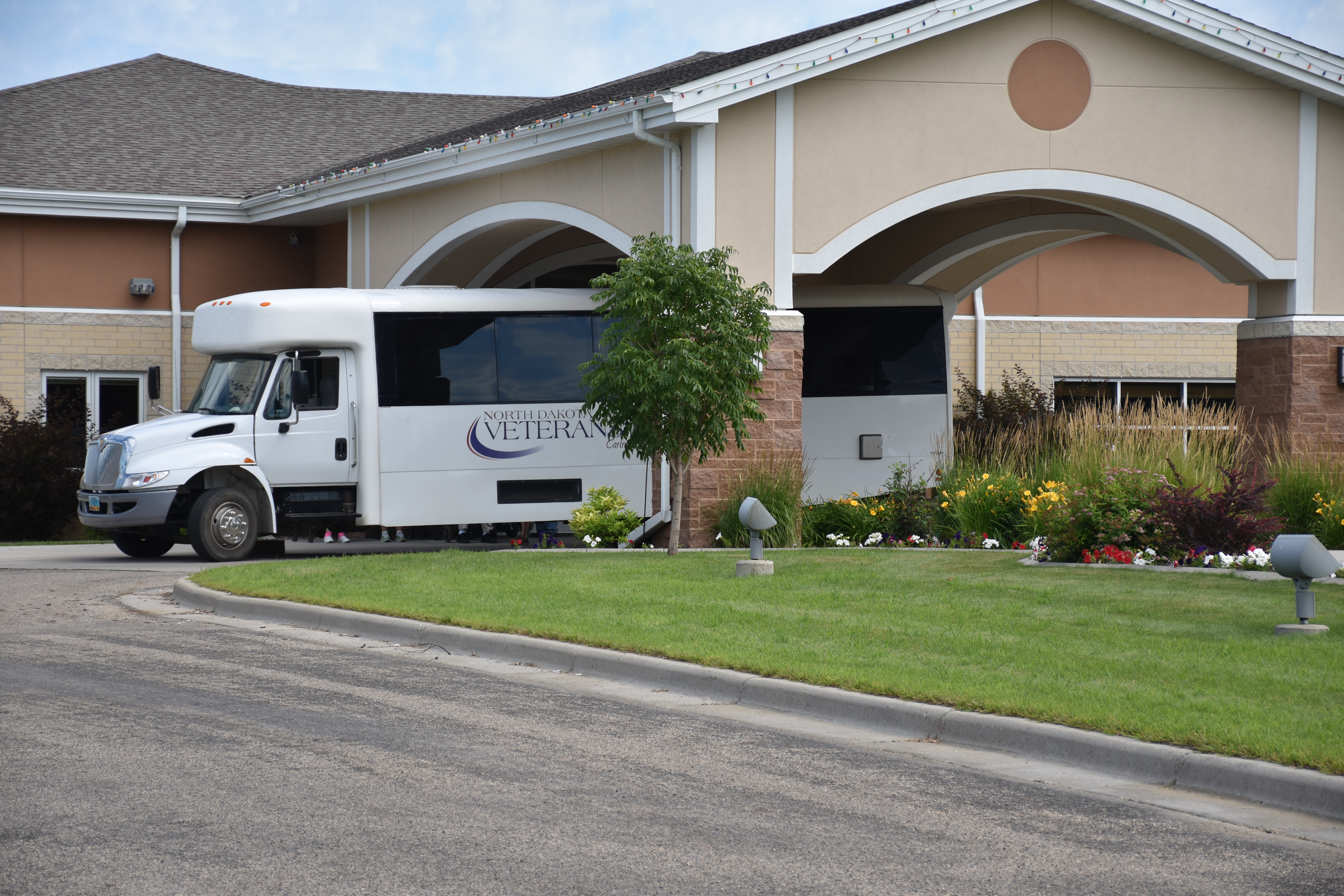 In 2017 the new woodshop and art studio opened.  These rooms are furnished with some of the most advanced, cutting edge tools on the market. 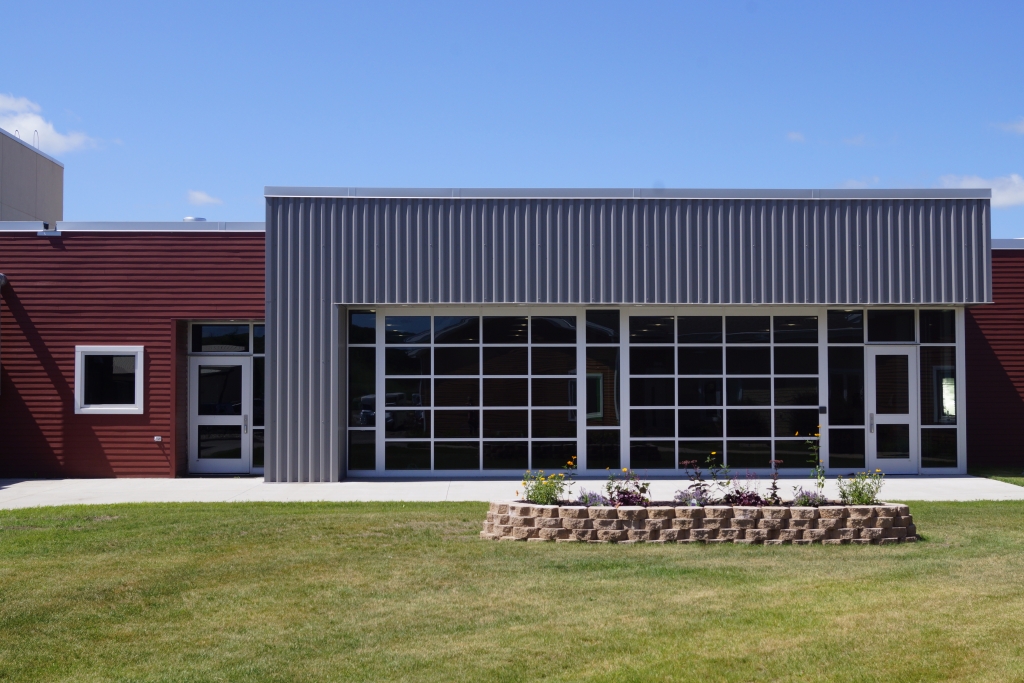 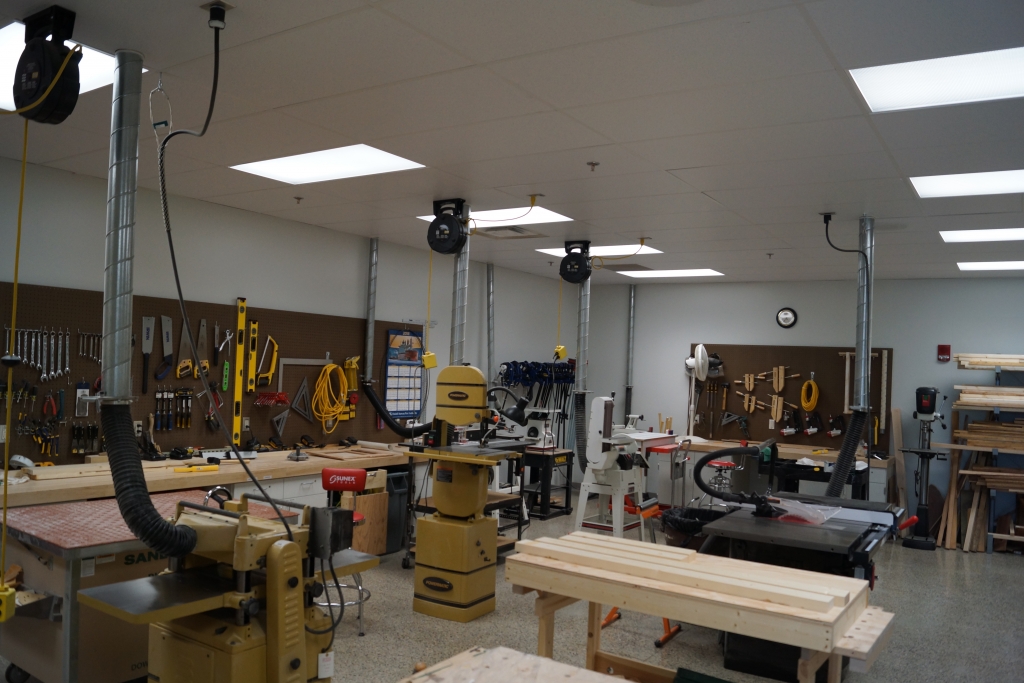 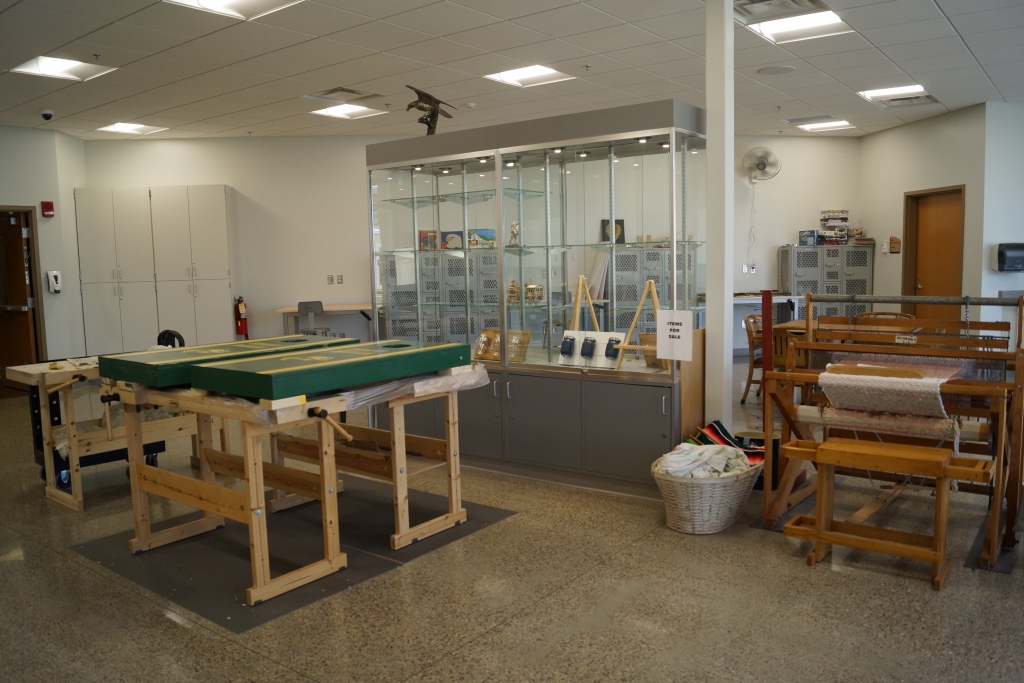 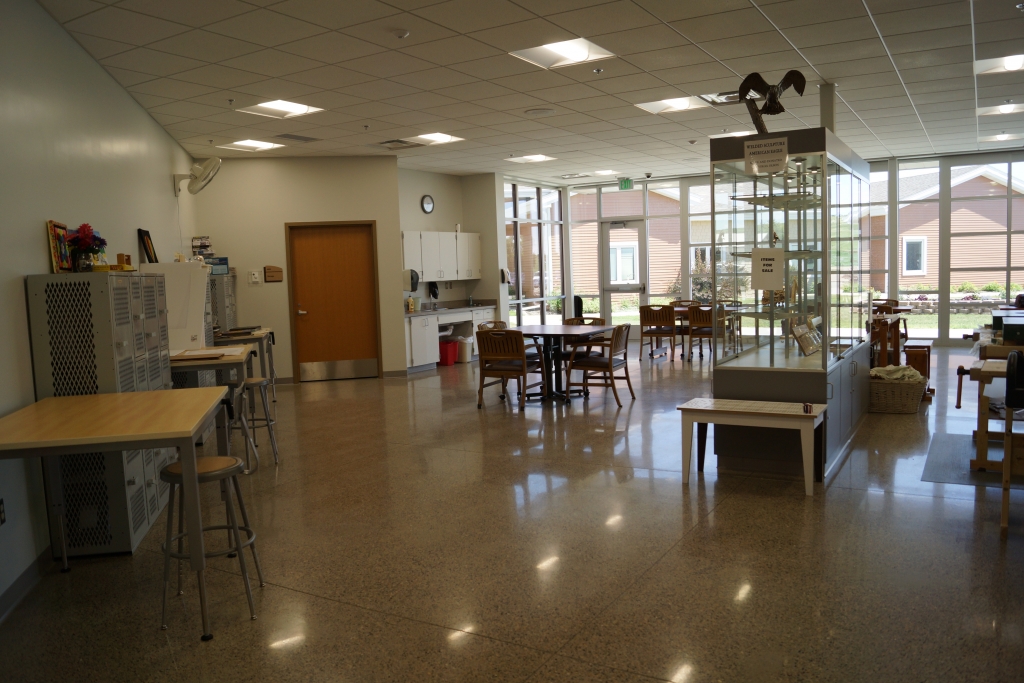 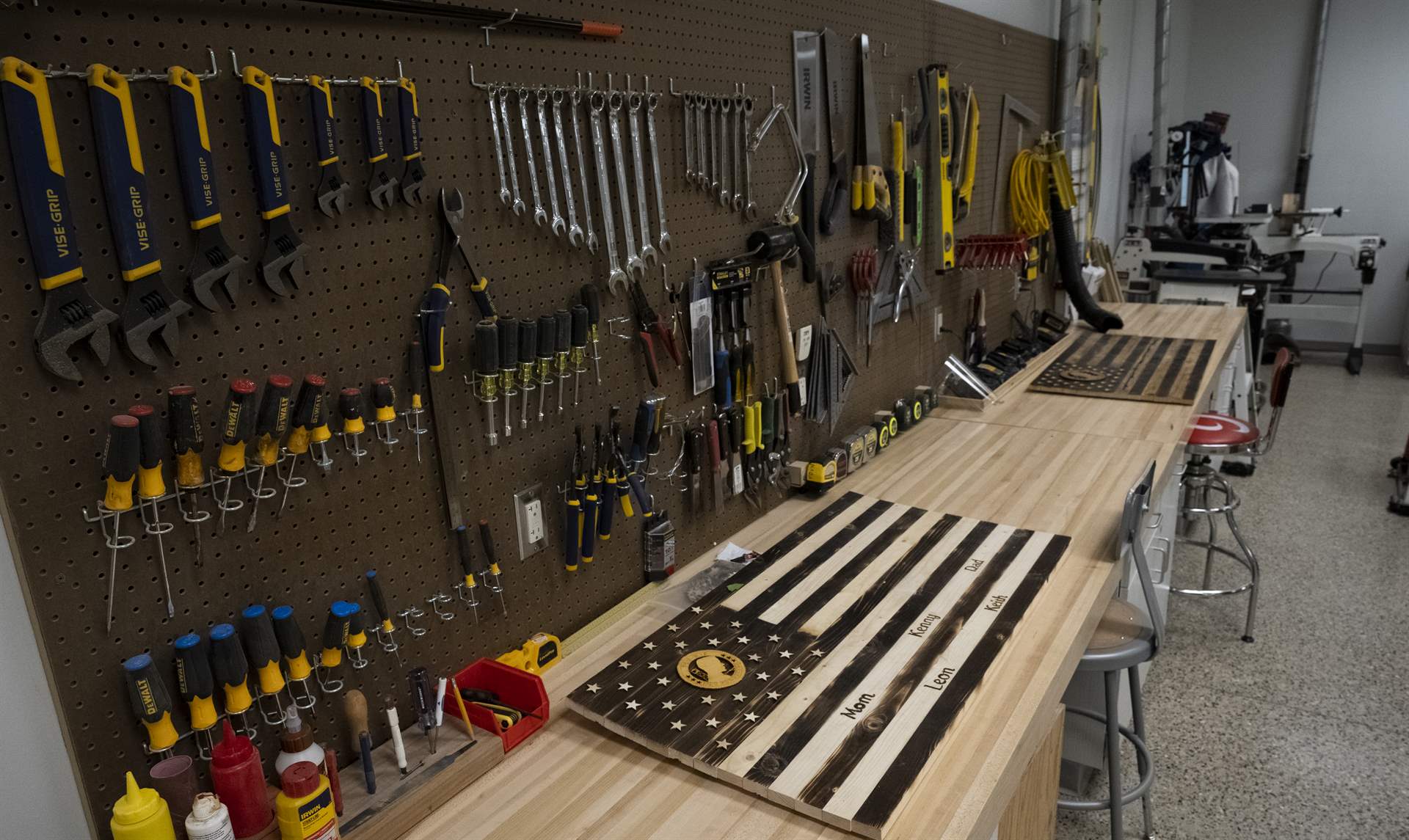 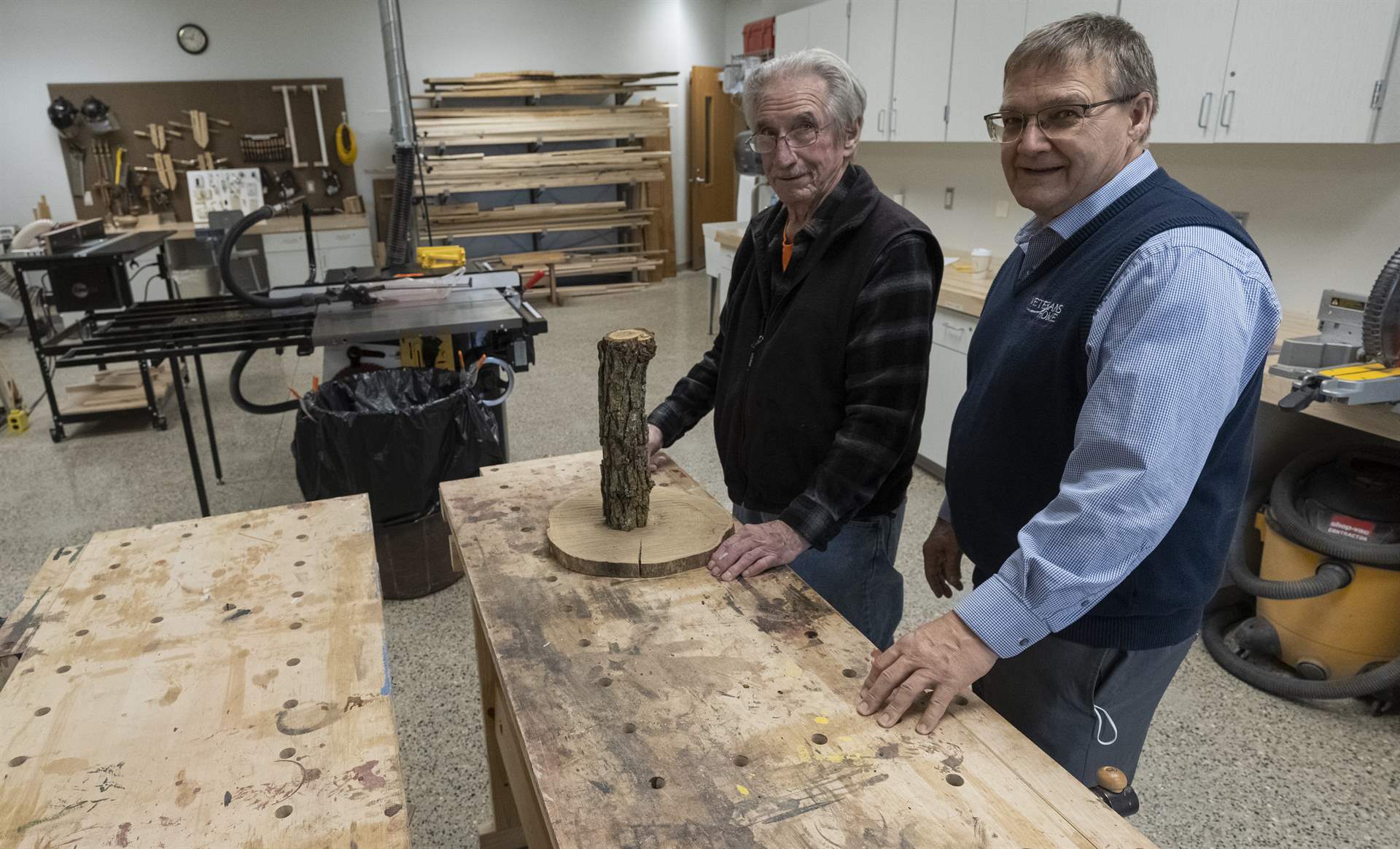